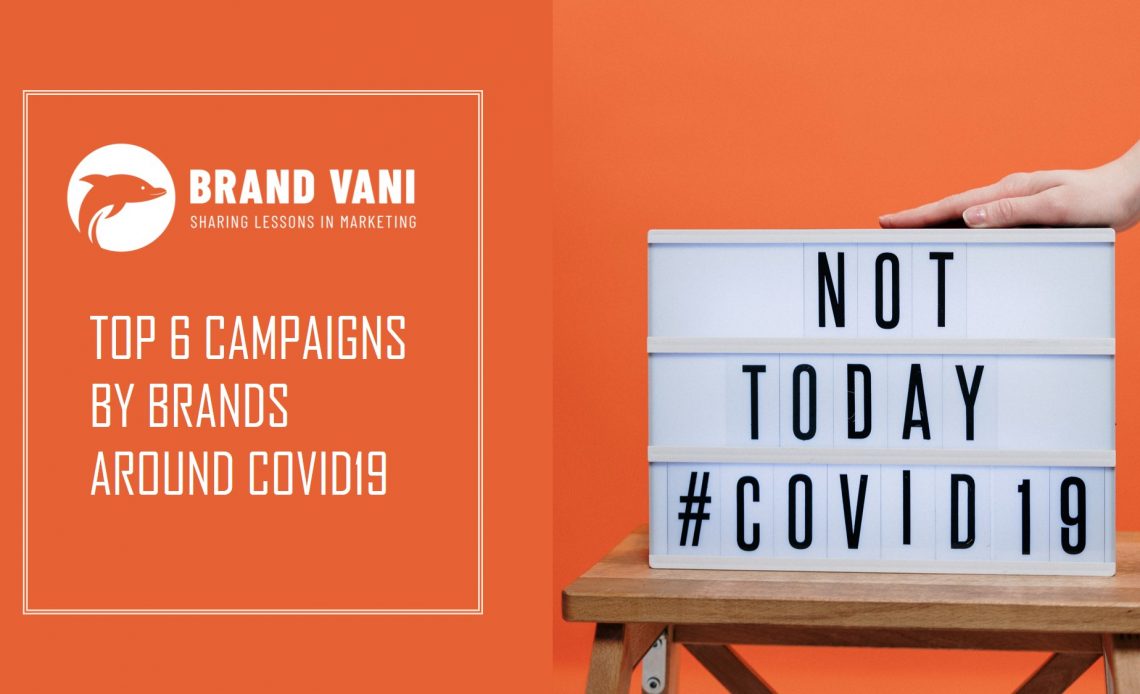 When the whole world is locked down due to the COVID-19 pandemic, brands across nations have evolved and proved that working from home and being open to ideas can fetch highly creative works than the usual workdays.

Let’s take a look at the top 6 COVID-19 campaigns launched by various brands in distinctive fields and understand how have they responded to the health crisis and how they have expressed support to the community.

With more than 3 decades of legacy, Dabur has always been close to our homes in the form of hair oil, energy drink, ailments, etc. Undoubtedly, across generations, women at home have been in touch with this household brand.

With COVID-19 crisis scattered everywhere, Dabur took an initiative to celebrate and salute women warriors who have stepped out of their homes leaving behind their duties as a mother, wife, or a daughter to fight the pandemic. It takes immense courage, effort, and strength to step out, demonstrate their selflessness to serve mankind, and ultimately enable all of us to come out of our homes safely. With this realization and strong notion, a flip-book themed ad film was featured on their official Youtube channel “MyBeautyNaturally” that has around 26.5K subscribers.

The theme of the ad film entitled “Dabur salutes Women Warriors” trended with hashtags, like #DaburAmlaStrongWomen, #StrongWomen, #COVID19, etc. The commercial depicts various warriors like Doctors, Nurses, Police officers, Journalists, and Sanitation workers getting ready to begin their duties with dedication. These women at the forefront, along with other women workers, including aid givers, media personnel, pilots, etc. performing their duties at the ground level against COVID-19 were thanked and saluted at the end of the commercial.

The ad film was created by Ogilvy, Delhi. Ritu Sharda, the chief creative officer at Ogilvy, India – North zone, said that it is very easy to stay home and play safe. But not all of them are lucky to do so. She also stated that it was a delightful experience to create and narrate such a super creative commercial to salute brave women warriors. With generosity, Rajeev John, the Senior GM, Dabur India Ltd., said that the little they could do was to make the real-life women warriors the heroes of their film.

“Ditch the Shake, Do the Namaste” by OYO

OYO Hotels & Homes is a budding startup founded by a Ritesh Agarwal at an age of 17. This Indian hailed brand is now leading in the hotel and home space realm. It operates in over 800 cities in 80 countries comprising over 43,000 hotels with more than a million rooms.

The OYO brand has been responding to the COVID crisis with an intention to support and help its business partners, dealers, and customers. For common people, the brand provides OYO corona concierge that serves as a one-point resource center creating awareness on precautions, symptoms, do’s and don’ts, etc.

The COVID campaign that went viral across social media channels was “Do Namaste.” The commercial focuses on the theme “Ditch the shake, Do the namaste.” Having it inherited, doing namaste is one of the most traditional ways to respect and welcome others in India. This small and almost forgotten habit has been found to have a lot of scientific and health benefits. Hence, reiterating this message via a commercial has made the brand gain attention and importance in the global arena. The purpose of revealing this message was to make people join hands and stop the link to spread the pandemic. The campaigns used hashtags, like #OYO, #DitchTheShake, #DoTheNamaste, #Namaste, #WeAreOpen, #FightCovidwithOYO, etc.

In addition to “Do the Namaste” campaign, the brand has constantly been insisting on subjects like Stay updated, Stay safe, Stay home, Wash hands, Maintain social distance, Avoid touching, Use masks, etc.

One another crowdfunding initiative by OYO that campaigns, “Donate a night” and “Book a Night for Self-isolation” has been trending, and many people have contributed to donating. These campaigns were launched to support medical professionals and frontline workers who are taking risks during the lockdown times. First responders like Medical staff, Doctors, Emergency services personnel, Policemen, and low-income individuals (daily wagers or migrants) are benefitted when a person volunteers to donate a night. Also, people willing to self-isolate and intend not to affect others shall use this opportunity to quarantine themselves at OYO hotels and spaces at affordable prices.

Established in the year 1948 by Soichiro Honda, the Honda Motor Co., Ltd has served millions of people through its innovations and inventions revolving around engines and broadly automobiles. The heritage of determination is still alive and is expressed in each of its new products and services.

Amidst a handful of automobile brands across continents like Audi, Volkswagen, Mercedes-Benz, Hyundai having responded to COVID-19 by changing or altering their logo temporarily to create awareness amongst people, Honda has not replicated the same. A distinctive, creative, and sensible ad film with Honda Civic Sedan’s scale model was unveiled to the surprise of everyone. The very specialty of the commercial that earned the appreciation was entirely shot indoors to demonstrate “Stay home” and “Work from home.” The commercial has not emphasized just the message of staying home or social distancing but the commitment to following the same and a shred of live evidence during the COVID crisis.

Like a usual car commercial, the ad film starts with picturing the external features of Honda Civic. Believe it or not, no one can imagine that it is a scale model. The twist comes only after we see some traces of furniture, workspace, carpet, and window peppered around the shots. This 35-second commercial definitely stands out from other automobile brand’s campaigns in the course of the COVID crisis. The commercial ends with a string note saying, “Until we drive again.”

Apart from the scale model ad commercial, Honda Car India has taken several measures to help the community, dealers, and customers. To mention a few,

“One team” by Anheuser-Busch’s Budweiser

Anheuser-Busch is one of the world’s largest brewers and largest sponsors of live sports and entertainment in the United States and owns a 165-year-old tradition of supporting its neighbors and communities through its existence.

Owing to the unprecedented COVID challenges, the brand has lent its support to the affected people via various means under the theme “#OneTeam.” The company believes that playing as one team is the only solution to overcome COVID challenges. The brand states that “In uncertain times, there’s one thing that remains certain: we are #OneTeam.”

The advertising agency David, USA, was hired to film a 77-seconds commercial portraying healthcare professionals, Red Cross workers, and people staying home. The commercial ends with the announcement on its donation to the American Red Cross and how the brand was going to shift its investments and priorities. The campaign also released one another emotional commercial (60-second video) that depicted the best of the American spirit, called “#OneTeam.” This was created to inspire the people in the country who are feeling isolated or fearful about the COVID crisis.

The purpose of launching the campaign “#OneTeam” was to,

All these services are a part of the $5 million donations to the American Red Cross by Anheuser-Busch. The brand also welcomes volunteers to join their tribe in the war against COVID-19. As #OneTeam, the brand in association with NVFC is offering 1.5 million cans of drinking water to those serving humanity at volunteer fire departments.

“Courage Is Beautiful” by Dove

Dove is one in the bucket of over 400 brands belonging to Unilever. The company was launched in the 1800s and has been serving people with their multitude of products until today. It is astonishing that at least one product of theirs is being used in 7 in 10 households in this globe. They have their presence in around 190 countries, and roughly 2.5 billion people are using their products on a daily basis. Dove is a beauty and personal care brand launched in the mid of 1900s.

Dove became magnificently popular after its Real Beauty campaign launched in the year 2004. Now, another campaign has surpassed this fame and has become much more emotional and inspiring to every human amidst the COVID health crisis.

The short and crisp ad campaign called “Courage is Beautiful” was released by the beauty brand Dove recently. This commercial is a simple yet powerful video filming a sequence of faces of first responders (Doctors, Medical staff, Nurses, Aid helpers, etc.) at work in the United States. The beauty brand perhaps would have had a conviction to thank, highlight, show the daily real-life heroes to the world, and cherish their courage as real beauty.

Needless to say, the commercial is absolutely a tribute to all the healthcare workers around the world who are fighting the pandemic. When we closely observe each of the courageous faces, we can spot impressions, deep marks, indents throughout their face, neck, and heads owing to constantly wearing personal protective gear, goggles, and masks for long hours and in some cases days.

Through this campaign (U.S. version), the brand unveiled its donations to care for healthcare workers and relief efforts in the U.S with around $108 million in supplies and cash, including 200,000 masks, essential products, personal care products manufactured in their factories, etc.

Another 30-second video commercial launched by the brand highlights the importance of washing hands properly carrying the message, “We don’t care which soap you use, we care that you care.” #CareFromDove, #WeWillFightThisTogether, and #ThankYou have been their most used tags across various campaigns.

The company was also found to be in association with a new initiative, “Beauty United.” This initiative brought together the beauty and wellness brand founders across the nation to pledge and raise funds and also donate personal care products to support our frontline responders.

“Shut Out Corona” by TATA Parvesh

Tata Pravesh is a brand of TATA steel that offers a complete range from steel doors to windows. The brand is distinguished for its unique product characteristics viz. the strength of steel and the beauty of the wood.

With over 1.3 billion people being locked down inside homes in the Lockdown 4.0 ordained by the Prime Minister of India and the Indian government, we could still see a number of people outdoors without realizing the importance of being indoor and flattening the curve with a break in the COVID-19 chain. This may be due to a lack of awareness or underestimating the consequences of stepping out of homes. TATA Parvesh witnessing this situation in some places in the country aimed to create an awareness campaign to stay indoors and shut the corona. The brand also believes that shutting all the doors in the country may yield the power to shut out Corona.

Like other brands, they opted for a digital medium and created a film with 1000s of Indians posting on their Twitter and Instagram profiles with the tag #DoorsOfIndia. This became viral and reached millions of people throughout the country as aimed. The film emphasized the crucial point of staying indoors using a conceptual picturization featuring numerous doors of India that is being closed. These shots were montaged along with the live imageries sourced from the Wunderman Thompson team across six Indian cities.

The commercial was carried on with a piece of Indian classical music created with the help of live sounds of doors, and windows, that are all shut. In addition, sounds from the ambiance, like dogs barking and people’s dialogues were used to make the commercial lively and to reiterate the viewers to stay home and stay safe. The classical music, along with the doors closed, depicted a live quarantine effect.